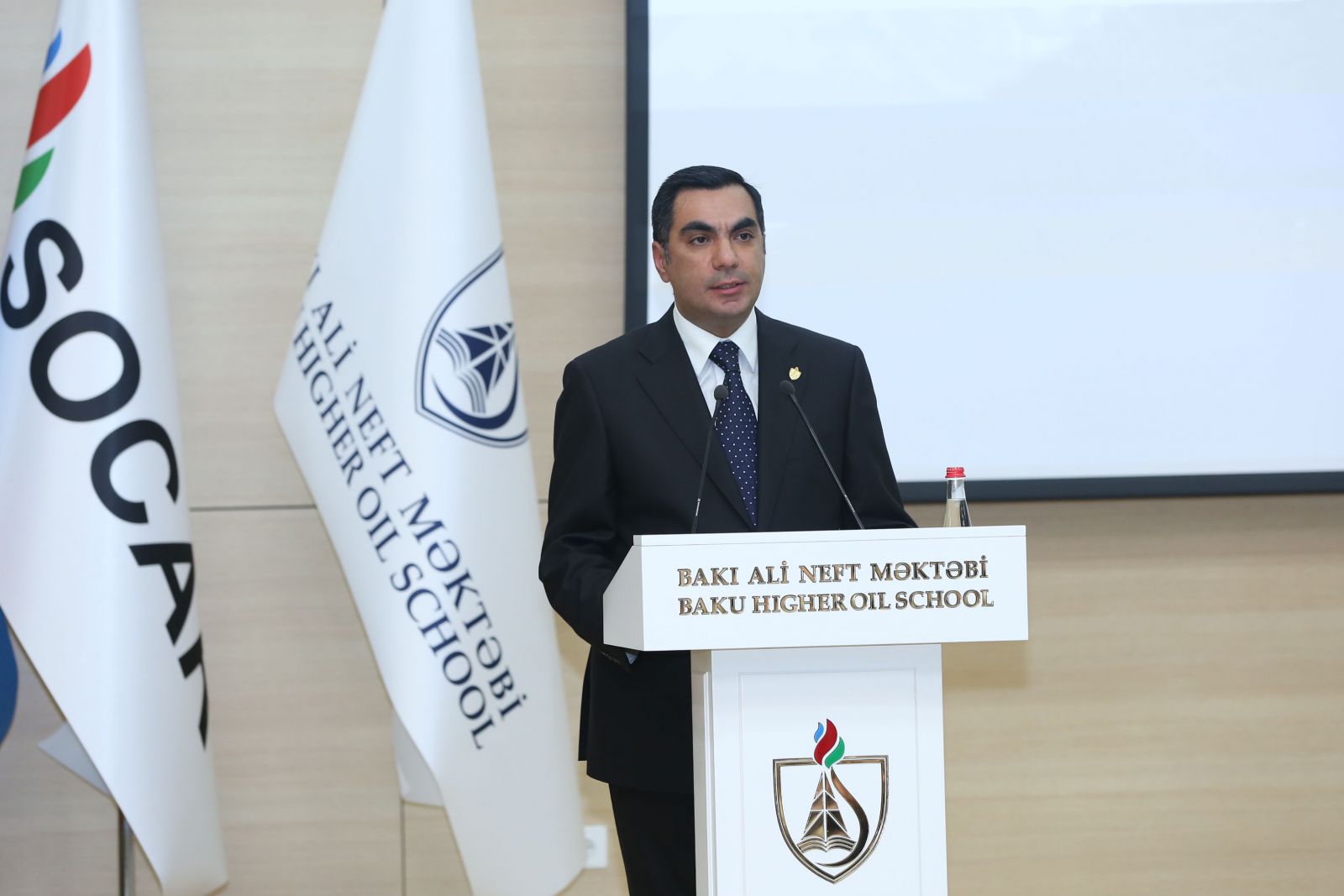 Baku Higher Oil School (BHOS) and “Zafar” (‘Victory’), Public Union for support of martyrs’ families held a special event in memory of the heroes who sacrificed their lives for the integrity of Azerbaijan in the April 2016 battles. The commemoration meeting, which was held in the Higher School’s Congress Hall, was attended by deputies of Milli Mejlis of Azerbaijan, top managers of state organizations, members of martyrs’ families, mass media representatives, and the BHOS students, teachers and senior staff members. Within the meeting, an exhibition of paintings depicting those who fall for the freedom and state independence of Azerbaijan was organized in the lobby of the Congress Hall.

The event started with playing the National Anthem of the Republic of Azerbaijan. The participants observed a minute of silence in tribute to the memory of the servicemen of national armed forces killed in the April fighting.

Opening the meeting, BHOS Rector Elmar Gasimov emphasized that remembrance of those Azerbaijanis who performed heroic acts for the sake of their motherland is a sacred duty for every citizen. In his words, the April battles became a glorious victory of Azerbaijani Army and demonstrated professionalism and high fighting spirit of Azerbaijani soldiers and officers. “We shall take all necessary steps to raise young people’s awareness of the national heroes who died in order to free the enemy-occupied land. We also shall support and stand by the President of the Republic of Azerbaijan Ilham Aliyev who always pays special attention to the needs of the martyrs’ families,” said the Rector.

Chairperson of “Zafar” Public Union Sevinj Alizadeh told about importance of patriotic education of the youth. In her words, providing necessary support to the martyrs’ families is a moral obligation of young citizens of the country. Speaking about heroic deeds of the Azerbaijan soldiers and officers, deputies Ganira Pashayeva and Vahid Akhmedov expressed confidence that names of the heroes of the April 2016 battles would always be remembered with deep respect.

Lieutenant-Colonel Elshan Garayev who was taking part in the April fighting shared his memories about his fellow servicemen and the acts of incredible bravery. In his words, they all contributed to the fight over Azerbaijani lands and were happy to gain the victory.

Jeyran Akhundova, mother of Azerbaijani soldier Abdulmejid Akhundov who was killed in the April fights extended her deep gratitude to the republic leadership for constant support and attention to martyrs’ families. She also expressed her appreciation to the event organizers for cherishing the memory of her son and other young people who fell in the April 2016 battles.

The event concluded with an art and music program dedicated to Azerbaijan, its army and national heroes. Alongside the BHOS students, well-known military radio presenter, the author of patriotic songs and chairman of “Support to promotion of patriotism” Public Union Shamistan Alizamanli sang popular songs from his repertoire.