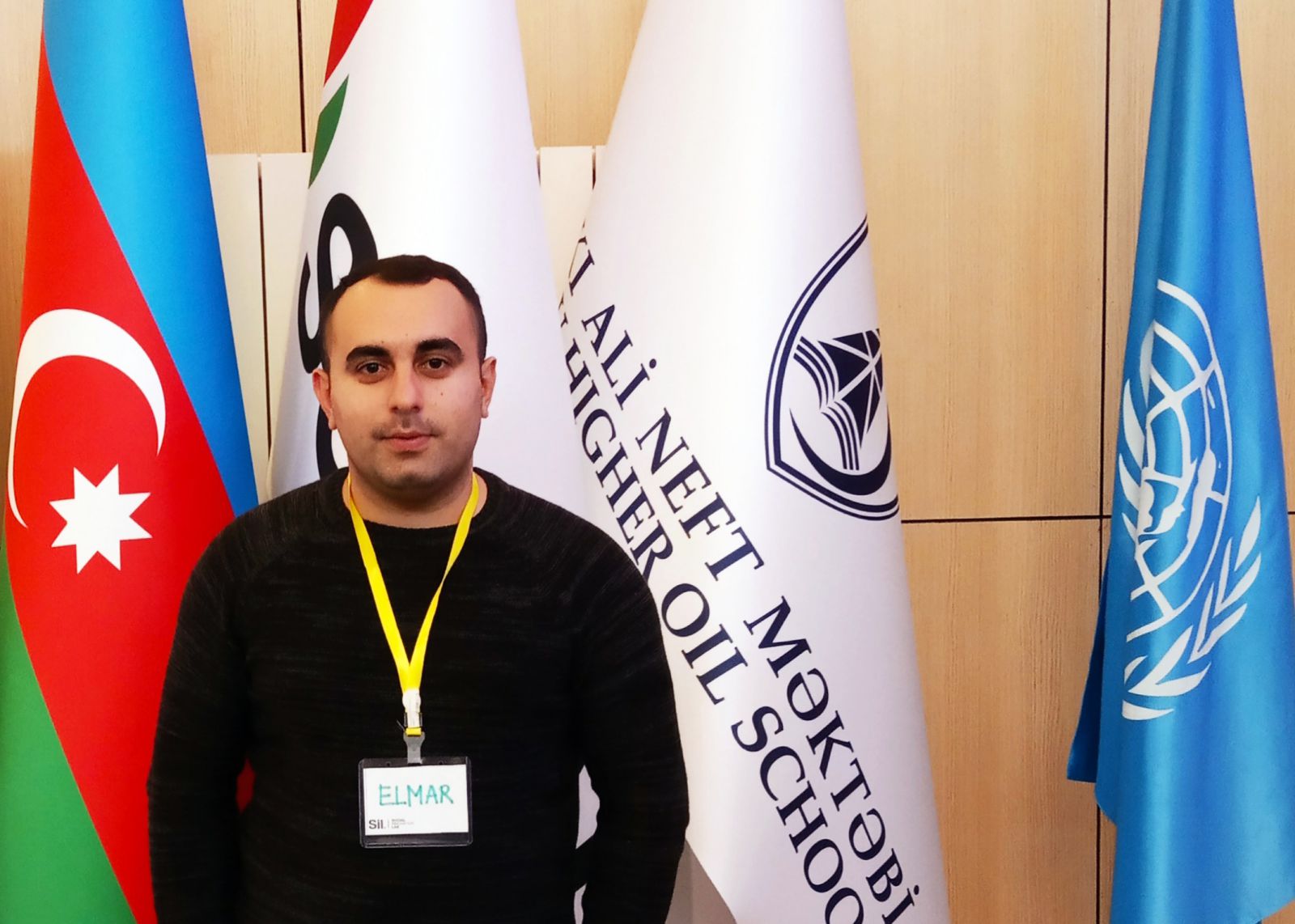 In February of this year, the graduate of the Chemical Engineering Department of Baku Higher Oil School (BHOS) Elmar Etibar oglu Askerzade was awarded the Presidential Award for Youth in accordance with the decree of the President of the Republic of Azerbaijan Ilham Aliyev.

He won in the category “Innovation and Entrepreneurship”.

Elmar Askerzade is one of the co-founders of the ThermoNorth startup of Baku Higher Oil School.

The ThermoNorth startup project was created in 2018 as a result of scientific research carried out in the Social Innovation Lab business incubator. The same year, ThermoNorth became one of the finalists of the international competition Cilmate Launchpad 2018, held in Scotland with the participation of 120 teams from 60 countries. Also, in 2018, the project won first place at the II Republican Innovation Competition, held jointly by the Ministry of Economy and the UN Office in Azerbaijan.

In addition, the startup project team participated in the international event "Istanbul Innovation Days - 2018" held through the UN. The same year, the Ministry of Economy awarded members of the ThermoNorth team with the Young Industrial Startup of the Year certificates.

In 2019, the ThermoNorth startup project took second place in a competition jointly organized by Azercosmos OJSC and the Social Innovation Lab (Sil.) as part of the NewSpace Business Accelerator Program.

We present to your attention an interview with Elmar Askerzade.

- How did you feel when you learned that you are one of the 10 young people who had been awarded the Presidential Award for Youth?

- When my teammate Hussein Aliyev came from Kazakhstan to Baku, I met with him to discuss the ThermoNorth project. In particular, we discussed issues related to the transition to the next stage of the project. During our conversation, I received a WhatsApp message from my groupmate Murad, which said that my name was indicated on the list of recipients of the Presidential Award posted on the President.az website. Honestly, I could not believe that my name was on the list. When I saw my name on the list, I could not express my feelings. I was very happy then. And I am ready to share this joy with other young people.

- Why, of all BHOS students, did you receive the award ?

- First of all, I would like to say that each of 10 young people received a presidential award in a certain category. Two young men, including myself, were declared winners in the Innovation and Entrepreneurship category. Innovation is considered a new area in Azerbaijan. Over the past two years, there has been an increased interest of young people in this area. And we, being students, decided to create the ThermoNorth project. Despite the fact that most startup projects become winners, many of them cannot be put on a commercial basis. I did not want our startup to remain a theory on paper. Together with other members of our team, I was trying to find a business solution for the project. For 2 years, this project had been winning places in local and international competitions. Several government agencies in Baku were monitoring the success of our startup. We were keeping in touch with employees of the Ministry of Economy and the Ministry of Transport, Communications and High Technologies and they saw that our team was not standing still, but was constantly working on themselves. My nomination for the Presidential Award for Youth was put forward on the initiative of the Ministry of Economy. I also consider it important to say that Baku Higher Oil School, in which I study, is the country's leading university in the field of innovation. Baku Higher Oil School has all the necessary conditions for development of young people. The rector and academic staff constantly motivate us to develop new ideas. I believe that my team deserves 99% of this award. I was included in the list only because I was the team leader, which means that our entire team received the award.

- How did the idea of creating the ThermoNorth startup come about?

- The idea of creating the ThermoNorth startup was mainly gleaned from the dissertation of Associate Professor of BHOS Amir Reza Vakhshuri.  He often attended scientific conferences with the participation of young scientists.  This idea was repeatedly discussed at these conferences. When I was a student, I showed great interest in scientific research. Working with the young professor Amir Bey, I improved my professional skills. Then I, as a team leader, and my teammates: Huseyn Aliyev, Murad Ragimov, Alexander Oborovsky, Yadigar Nazarov engaged ourselves in the formation and development of the startup project. We participated in many local and international competitions with our startup project.Thanks to the good results achieved at these competitions, our project was accepted in the US Business Incubation Program. When we were in America, we learned that a project must go through many difficult stages in order to achieve success in business. Following the advice of experienced international experts, we had gone through all these stages. As a student, I could devote all my attention to this startup. Had I worked, the project would have remained a scientific work. That’s why I refused job offers. I, together with my team, had to promote the project. Harry Wood from the USA and Sergey Gurevich from Georgia supported our team as consultants. Behruz Mohammadi helped us in creating the product.

- What is the main goal of the startup project?

- What is the practical significance of the project for people?

- Maintaining the optimum temperature for engine operation solves a number of problems in countries with a cold climate, such as excessive fuel consumption, failure of engine parts, shortening the battery life, etc. Both people and companies are interested in resolving such problems.

- What can you say about the prospects of the project?

- Our project will contribute to maintaining environmental cleanliness, reducing carbon dioxide consumption, saving energy and money, more efficient operation of vehicles in cold climates. While in America, we received a patent for the ThermoNorth startup project and created the company ThermoNorth Inc. Our product has been finished and sent to France for testing. We plan to start selling it soon.

- What would you advise to young people who have an idea but cannot realize it? What is your formula for success?

- First of all, young people must have a keen sense of observation, so that they can consider the problem from different angles. Then they should think about a creative solution to the problem and spend their knowledge and energy on this. It is also very important to find highly motivated teammates. It is hard to work without a team. When you encounter a problem, you will definitely need to discuss it with the team to solve this problem together. Team members do not have the same potential, so we must try to ensure that those with good motivation and skills focus on solving the problem. And most importantly, the idea should not just remain on paper. People should feel its practical value in their lives. Young people should try to turn the idea into a business so that it benefits people. For this, they will need to work hard and go through many stages. Young people should not be afraid of difficulties, negative reactions, criticism and competition. All these difficulties will help young people  better assess their prospects and skills in practice. They should not be discouraged, and they must go to the end with their team.

- Do you have new ideas and projects for the future?

- We already have a second project called Climasel. Climasels are energy-saving panels for suspended ceilings. Using these innovative panels will save 25% of the energy consumed by air conditioners. The Climasel startup project is mainly intended for Central Asian countries, as it was developed for use in places with rapid change of temperature. But now I am fully focused on the ThermoNorth startup project. We want to make it an international business project and make money on this. If we manage to do this, we will invest the money earned from this project in the Climasel project and two more new projects that we also want to implement.