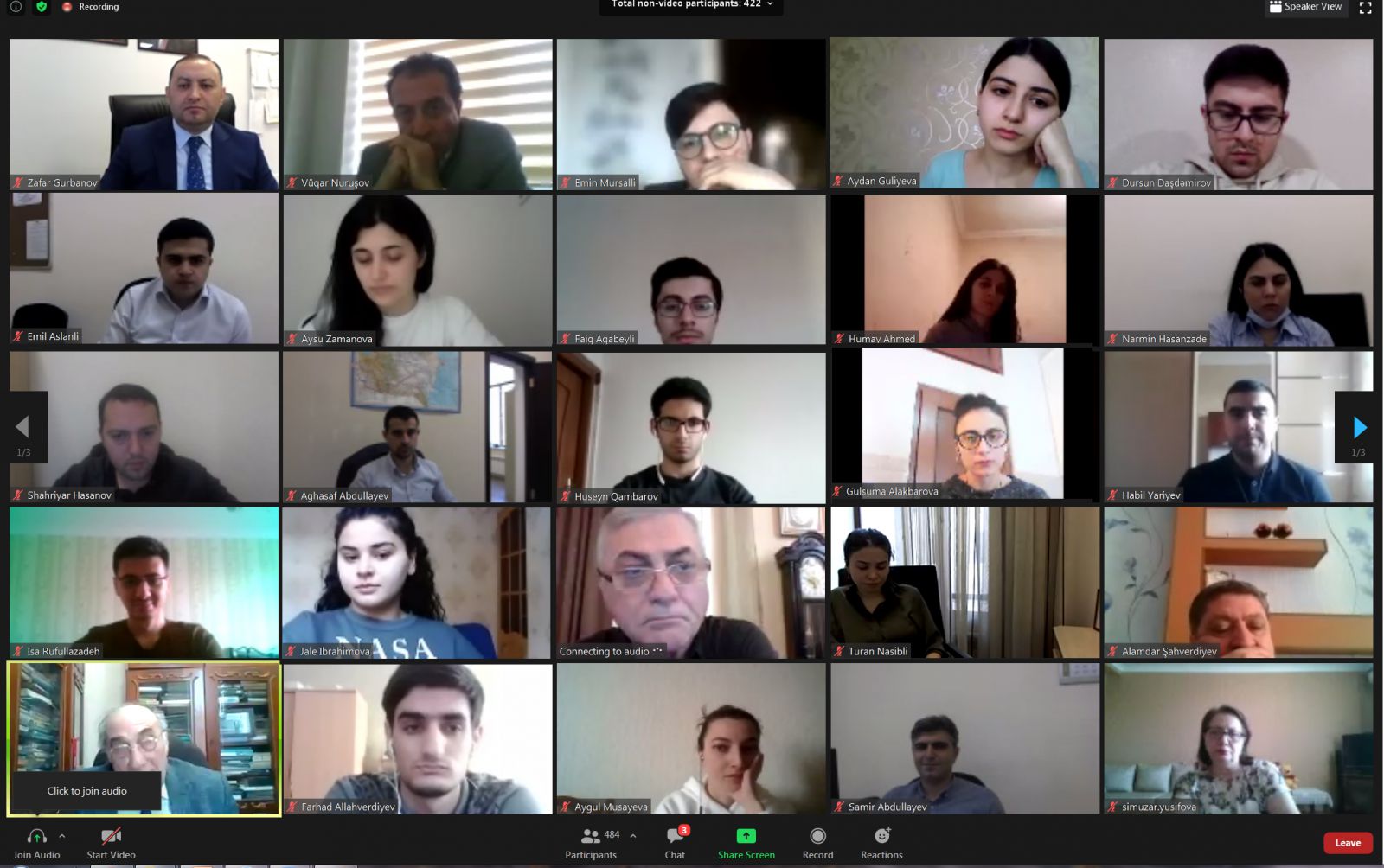 The Synergy Club of Baku Higher Oil School (BHOS) has held a webinar on the topic “Global Eco-energy Problems”.

The speakers at the webinar were Fuad Veliyev, professor at the Petroleum Engineering Department of BHOS, and Aida Aslanova, a teacher at this department.

It was noted that at present, global problems of eco-energy are the most pressing problem of humanity.

“This problem arose back in the late 18th century with the beginning of the Industrial Revolution, the reason for which was the invention and introduction of thermal machines”.

In his speech, prof. Fuad Veliyev noted that billions of heat machines are running in cars, planes, ships, industrial facilities, power plants, household, and billions of tons of contaminated, toxic emissions are constantly poisoning the environment every hour, every day – they are discharged into rivers, seas, released into the atmosphere, thrown into the soil.

“The very fragile energy-matter balance in the Earth's biosphere is disrupted, and, finally, the threat to the existence of life on our planet increases day by day. One of the alarming manifestations of the Global Warming is the accelerated melting of Antarctic and Arctic glaciers. The increase in the concentration of CO2 is the cause of an increase in the acidity of Ocean waters, and this, in turn, causes irreversible changes in the flora and fauna of the Ocean. The area of tropical forests is reduced annually by about 100 thousand square kilometers.  If this goes on, the tropical forests, considered to be the lungs of the planet, will disappear completely in the coming decades, which in turn will accelerate climate change”.

He said that there are two fundamental scientific problems the solution of which can once and for all save humanity from the eco-energy concern: Obtaining controlled nuclear fusion; Revelation of an effective and efficient method of obtaining of free hydrogen and its use as a fuel.

“Now we have only two opportunities to mitigate the existing problem: Wide use of renewable energy sources; Ensuring maximum energy saving regime in all fields of activity, in household and industry, with the wide application of energy-saving methods and technologies. Only 20% of the planet's population lives in industrially developed countries, but these countries produce 75% of the total industrial waste that pollutes the environment. The Earth's capabilities to meet the annual resource demand of mankind and to accommodate waste are no longer sufficient. To meet this demand, according to the assessment of the Global Footprint Network organization, our planet should be 1.7 times larger”, the professor added.

It was noted at the webinar that in 1997, the Kyoto Protocol was signed and certain commitments were made by countries to reduce emissions.

“In addition, at the conference attended by the heads of 195 countries in Paris in 2015, a historic agreement was reached on measures to mitigate the climate change, allocation of necessary investments to reduce carbon dioxide emissions, and financial and operational commitments of each country”.

Zhalya Ibrahimova, a fourth-year student of the Petroleum Engineering Department of Baku Higher Oil School, said that the leading role in this struggle should be played by young people - because this problem concerns, first of all, their future, the future of new generations.

She noted that the Youth Ecological Center “Synergy” (YES Center) was established at Baku Higher Oil School to guide the activities of young people in this direction.

“The Mission of the YES Center is Estimation and Control of the Ecological Footprint of the Population groups and Enterprises, Elaboration of Arrangements to Lower an Antropogen Loading on Nature in Azerbaijan. The Vision of the YES Center is Creation of an International Network of Young Conservationists and formation of International YES-Movement”.

Note that according to Global Footprint Network Organization, almost half of wildlife has been destroyed during the last two human generations. The amount of CO2 emitted annually into the atmosphere has reached 40 billion tons. According to the International Meteorological Organization, the concentration of CO2 in the atmosphere has reached a record value for the last 800 thousand years – 410ppm. This is one of the main causes of global warming - the gradual rise of average temperature of the Earth.