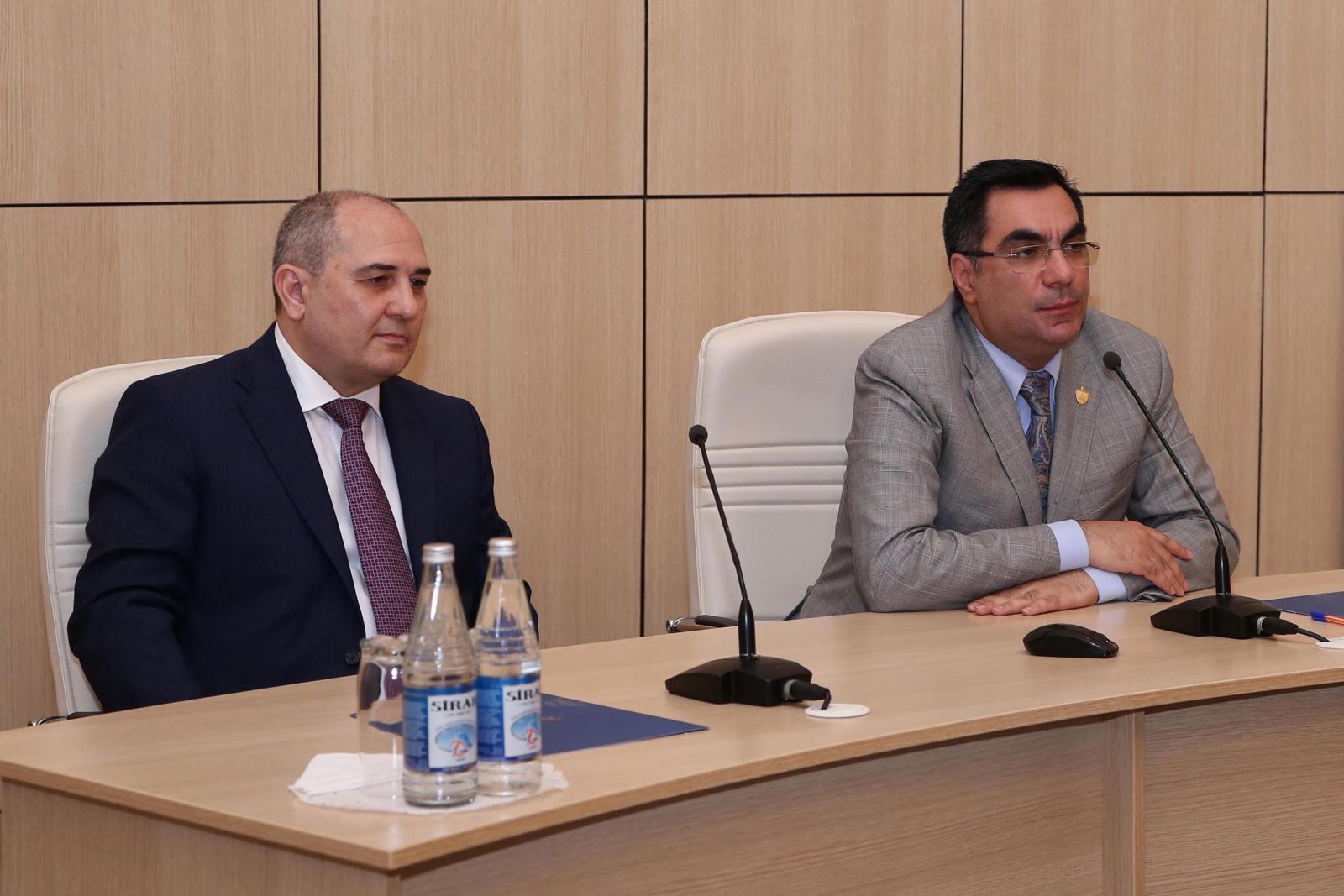 Baku Higher Oil School (BHOS) has hosted an event entitled "Our National Salvation and Historical Victory". The event was dedicated to June 15 - the National Salvation Day, which is of great importance in the fate of the Azerbaijani people.

The meeting was attended by Deputy Chairman of the New Azerbaijan Party (YAP), Head of the Party's Central Office Tahir Budagov, students, teachers and staff of Baku Higher Oil School.

Under the quarantine rules, the live meeting, attended by only a part of the participants, was broadcast online. In total, about 900 people joined the online meeting.

Deputy Chairman of the New Azerbaijan Party, Head of the Party's Central Office Tahir Budagov first got acquainted with the learning conditions, material and technical base, social infrastructure and research environment created at the university. Rector of Baku Higher Oil School Elmar Gasimov informed the guest in detail about the education process at the university, infrastructure and plans for the future. Flowers were laid at the bust of the National Leader. The guest also got acquainted with classrooms, research laboratories, the Innovation Center and the museum that houses rare oil history exhibits.

Speaking at the event, Tahir Budagov noted that the National Salvation Day has great social, political and historical significance in our history. He stressed that the return of National Leader Heydar Aliyev to power on June 15, 1993 went down in the centuries-old history of our nation as a fateful political event.

“With his rescue mission, the National Leader of the Azerbaijani people Heydar Aliyev defended the independence of our republic, overcame the socio-political crisis in the country and laid the foundation for development. Today, the triumph of the ideology of National Salvation is reflected in the sustainable development of our independent republic, and the prestige of Azerbaijan in the region and the world is growing day by day. Traditions of independent statehood have now been formed in Azerbaijan, and, of course, the selfless merits of the National Leader Heydar Aliyev played a vital role in this achievement,” YAP Deputy Chairman said.

Tahir Budagov also emphasized that the historic victory achieved as a result of Operation Iron Fist was won thanks to the leadership qualities of the victorious Supreme Commander, President Ilham Aliyev, Azerbaijan's achievements in the political, economic, cultural, military, diplomatic spheres and the unity of the people and authorities.

Rector of Baku Higher Oil School Elmar Gasimov, in turn, called the return of National Leader Heydar Aliyev to power on June 15, 1993 a glorious page in the history of our statehood.

“All these achievements are based on the political course determined by the National Leader, and President Ilham Aliyev’s successful pursuit of this political course. Today, thanks to the successful policy pursued by President Ilham Aliyev, Azerbaijan has become a dynamically developing, modernizing country. The prestige of Azerbaijan in the international arena has significantly increased, and great economic success has been achieved in the republic in recent years,” the rector added.

At the end of the meeting, Tahir Budagov answered numerous questions from BHOS students.