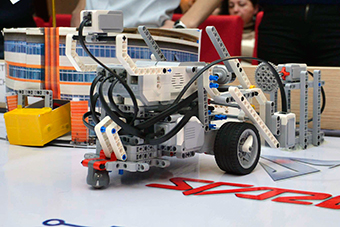 Robotics contest gathering BHOS students studying in process automation engineering programme was organized at BHOS by process automation engineering department. Welcoming students BHOS rector Elmar Gasimov wished every success the participants of the contest. He stressed that he was particularly glad that students were able to exercise their knowledge during extracurricular activities. Elmar Gasimov attached great importance to students’ creativity and initiatives urging them to proceed in this direction. Speaking about students’ contest and exhibition BHOS rector said that participation of representatives of international companies, BHOS partners, was also worthwhile. He also said that the companies had already chosen its specialists and expressed his gratitude to Avandsis GROUP, Schneider Electric, Emerson Process Management, ABB, Siemens companies which presented the students their encouraging gifts. Elmar Gasimov also thanked BHOS process automation engineering department for organization of the contest. He emphasized that BHOS process automation engineering specialization is very essential one and that students’ activities were always focused on there. BHOS rector said that he was convinced that such kind of contests would be organized continuously and drew attention of the audience to the importance of organization of the contest with involvement of the secondary schools. He particularly recommended to involve pupils of the secondary schools in the similar contests.

Then the contest engaging six teams started. Students showcased robots made by them and informed about their functioning. According to the juries’ assessment “New Era” team became the winner of the contest, “Moon Walkers” took runner-up position and the team who finished the contest the third was “Star”. The companies BHOS is cooperating with presented their gifts to students who took first, second and third places. It should be pointed out that 18 third year students joined the contest.