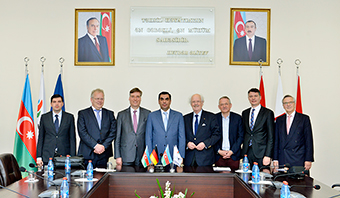 BHOS rector Elmar Gasimov cordially welcomed guests while opening the meeting. Touching upon the relations between Azerbaijan and Germany BHOS rector talked about cooperation existing between both countries in the field of science and education. Underlining that  BHOS was established in accordance with the decree of the President of Azerbaijan Republic Ilham Aliyev, BHOS rector briefed on the history, achievements gained within short period of time, activities, international relations associated with BHOS and new campus of the higher school.  Elmar Gasimov said how the motto by the President Ilham Aliyev ‘We should turn oil capital into human one’ was realized. Stressing the fact of cooperation existing between BHOS and a number of international companies Elmar Gasimov particularly stressed the cooperation between BHOS and German E.ON Company and University of RWTH Achen University, Germany, in the field of renewable energy.

BHOS rector also said that established in line with European education system requirements BHOS attached great importance to linkages with European higher schools involved in engineering specialization. He expressed his interest in commencement cooperation with Ruhr University of Bochum in terms of exchange of students, lecturers, cooperation in the field of research and education.

Dr. Otto Wulf expressed his contentment in visiting Baku and appreciated the warm welcome received from the management of BHOS. Talking about Ruhr University of Bochum being the largest educational institution in Germany Dr. Wulf said that it was one of the pioneering institutions in Germany, which introduced Bachelor and Master level education programmes. BHOS management and German guests discussed perspectives of potential cooperation between both higher educational institutions. The meeting also included broad discussions on energy related politics, renewable energy, legal and economic issues.