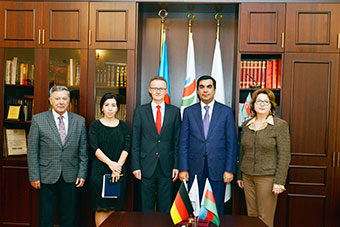 A meeting of Rector of Baku Higher Oil School (BHOS) Elmar Gasimov with Ambassador of Germany to Azerbaijan Mr. Michael Kindsgrab took place at BHOS. The Rector briefed the honorable guest about activities of the Higher school established upon a Decree by the President of the Azerbaijan Republic Ilham Aliyev and successes achieved since BHOS commenced its work. Elmar Gasimov also informed the Ambassador about BHOS international cooperation with leading universities, companies and organizations in other countries.

Having expressed his gratitude to the Rector for the cordial reception, the Ambassador of Germany to Azerbaijan Michael Kindsgrab showed a keen interest to development of business relations between BHOS and German universities. The Ambassador also shared his vision of the ways and spheres of BHOS cooperation with higher educational institutions of Germany.

At the meeting, Michael Kindsgrab was presented with BHOS Honorable Guest diploma. The Ambassador made a record in the BHOS Distinguished Visitors' book.

During his visit to BHOS, the German Ambassador Michael Kindsgrab attended lessons and was introduced to students and professors of the Higher school.