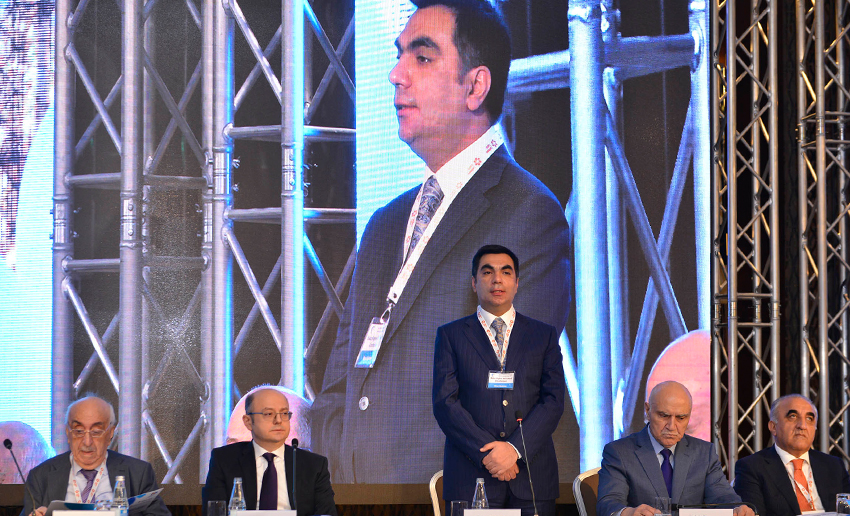 The 3rd SOCAR International Caspian and Central Asia Downstream Forum – Trading, Logistics, Refining, Petrochemicals opened on April 23, 2018, with the organizational support of Baku Higher Oil School (BHOS). This year the number of countries participating in the Forum has increased as compared to last year.

The event is attended by top tier managers of petroleum organizations and companies, of whom 72 are from Azerbaijan, 49 –  Russia, 32 – Kazakhstan, 53 – Great Britain, Germany, France, Switzerland, Italy, Spain, Austria, Poland and other European countries, 18 – the UAE, Iran, Turkmenistan, Uzbekistan and other Asian countries, and 2 - from Singapore. Opening the forum, Rector of Baku Higher Oil School Elmar Gasimov said that the SOCAR International Forum, which has been held for three years, is dedicated to the 95th anniversary of the birth of National Leader of the Azerbaijani people Heydar Aliyev.

“The Forum serves as an effective platform for promoting to the whole world the successful oil strategy implemented under the leadership of the President of the Republic of Azerbaijan Mr. Ilham Aliyev. About 230 participants, including top tier managers of leading oil and gas companies from about 30 countries are taking part in the 3rd SOCAR International Forum. This indicator shows that Azerbaijan occupies an important position in the world oil sector,” Elmar Gasimov said. The forum participants first paid tribute to the memory of National Leader Heydar Aliyev by watching a short film about his life.

Speaking at the opening ceremony of the 3rd SOCAR International Forum, Minister of Energy of the Republic of Azerbaijan Parviz Shahbazov, Deputy Chairman of the Milli Majlis of the Republic of Azerbaijan Valeh Alasgarov, SOCAR's First Vice-President, academician Khoshbakht Yusifzade, BP Vice President for Azerbaijan, Georgia and Turkey Bakhtiyar Aslanbeyli, Rector of Baku State University, academician Abel Maharramov, and Rector of Azerbaijan State University of Economics Adalat Muradov greeted the forum participants and wished them success in the coming days.

The main purpose of the Forum is to analyze the latest trends and development prospects for trade and sale of hydrocarbon resources in the Caspian and Central Asian regions.  During the first three days of the forum, 40 participants from 30 countries will speak on relevant topics.

On the last day of the forum, technical trips to the Heydar Aliyev Oil Refinery and the Sumgayit Petrochemical Complex will be organized for participants from different countries.The forum participants include representatives of government agencies, oil and gas companies (traders, oil and gas production), petrochemical enterprises, transport companies (ports, terminals, pipelines and forwarding agents), banks, law and consulting companies and equipment manufacturers, as well as companies and universities that develop new technologies.