Researcher who graduated from Baku Higher Oil School: ‘I am proud to be a BHOS graduate’ 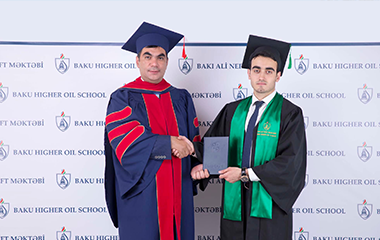 Ali Mammadov is one of the first graduates of Baku Higher Oil School (BHOS). He entered the BHOS Chemical Engineering Department in 2012 with a score of 637 and graduated it in 2017. Currently, Ali Mammadov works as a junior researcher at the “Energy Saving Radiation Processes” laboratory of the Institute of Radiation Problems of ANAS. He is also the Chairman of the Council of Young Scientists and Specialists.

Ali Mammadov, who took part in the Third International Student Research and Science Conferences dedicated to the 99th anniversary of the National Leader Heydar Aliyev, held at Baku Higher Oil School, said that young people’s interest in science has increased. The young researcher considers that it is important for students to display activity not only in science, but also in social and public life. Ali Mammadov, who chose the path of science, explained the reasons for this:

"Not everything in life is material. Someone must sacrifice his life in the way of science. I think that our youth and future are more important in this life than material things. Most importantly, we must do something for our country. We must be active not only in science, but also in social life. This burden falls on young people’ shoulders. Looking at our past, we must follow the example of the older generation, and we must build our future by living in the present."

The young researcher stressed that his education at BHOS aroused his interest in science.

“The environment at the university, the professional competence of the teaching staff and the knowledge they gave us was at the highest level. We develop ourselves by being influenced by our teachers in a good way and with their support. I am proud to be a graduate of Baku Higher Oil School, which trains world-class engineers.  BHOS graduates study and work not only in Azerbaijan, but in all countries of the world, honorably representing their fatherland abroad. For all this, we express our deep gratitude to our esteemed Rector, our valuable faculty, and to the entire BHOS family.”